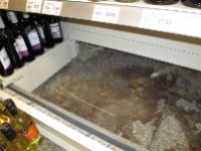 A series of food hygiene offences has cost a Powys business over £43,000 after it was prosecuted by the county council.

First Stop (Welshpool) Limited which is based in Welshpool appeared at Llandrindod Wells Magistrates Court this week (Wednesday, September 13) in a prosecution led by Powys County Council's Environmental Health Team.

Representatives of the company pleaded guilty to 10 food hygiene offences and also asked for a further three offences to be taken into consideration. The offences included:

The court heard how an environmental health officer from the council visited the premises in Welshpool in November 2016 having received a complaint from a member of the public regarding rat activity in the shop. The complainant said that they had seen rats in the shop area.

The officer who visited the same day found evidence of a severe rat infestation. Gnawed food and food packaging was found throughout the premises including on the shelves where food was displayed for sale. Rat droppings were also found throughout the premises. A number of access points were found where Rats had excavated through the wall and floor structures gaining access to the food premises.

Food products were found on display for sale that had been gnawed by rats. The officer also found that staff at the store had been aware of the presence of rats and had routinely removed gnawed foods from sale every morning. No measures had been put in place to either control the rats or to protect food from contamination.

The standards of cleanliness in the premises were found to be unacceptable. Accumulations of dirt, debris, gnawed packings, materials from burrowing and rat droppings were noted throughout the premises on the floor coverings and on storage and display areas throughout the shop. Also the staff toilet facilities were in a very poor standard of cleanliness. There was no evidence to show that cleaning and disinfection was taking place.

In addition, the refrigerators and freezer were found to be in a dirty and damaged condition. The internal surfaces of a back-up chiller were in a very dirty condition, with evidence of food spillages that had not been cleaned up, and the door seals were damaged and in a filthy and mouldy condition.

Due to the imminent risk to health caused by the infestation of rats, the officer closed the food premises by serving a Hygiene Emergency Prohibition Notice. The business remained closed until the rat infestation was eliminated.

Magistrates also heard that company failed to comply with a Hygiene Improvement Notice served in respect of one of the refrigerators.

As a result of the inspection, the premises was awarded the lowest Food Hygiene Rating of zero.

However the company did not display their rating sticker correctly, in that only the rear of the sticker was visible to customers as they entered the premises, and not the face of the sticker which showed the zero rating. Despite being warned about the incorrect display, the rating was not displayed correctly, consequently a fixed penalty notice was issued however the company did not pay this, as a result, this offence was also considered by the magistrates.

In a further visit to the premises in May 2017, the inspecting officer found that the display refrigerators containing high-risk food items were not operating at the correct temperature. High-risk foods like cooked meats, cheeses and pies were found being stored at between 11°C and 15°C rather than at or below the legal limit of 8°C.

In addition during this visit, six packs of cooked meat were found being displayed for sale past their use-by date. These offences were also considered by the Magistrates.

Magistrates fined First Stop (Welshpool) limited £40,000 for the 13 offences and ordered them to pay £3,000 prosecution costs and a mandatory surcharge of £170.

"In this instance, First Stop (Welshpool) Limited fell far short of the standards expected of them, to a point where officers had to take immediate action to prevent a risk of injury to health.  The presence of rats in a food premises is unacceptable, these rodents carry harmful diseases that can be past to humans through food.