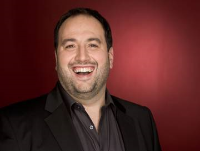 The host for the Powys Business Awards ceremony being held on Friday, October 6th has been announced as TV's favourite spoof opera star Wynne Evans.

Wynne Evans is one of the UK's leading tenors, having performed as a principal with all of the major opera houses and orchestras, including Royal Opera House, Covent Garden, Welsh National Opera and English National Opera.

In 2009 Wynne became the face and voice of the multi million pound advertising campaign for one of the UK's leading comparison website GoCompare.com, playing the flamboyant character Gio Compario.

Wynne has gone on to make dozens of adverts for GoCompare.com both on Radio and TV and this campaign is one of the most successful ever.  Wynne signed a six album deal with Warner Bros. and his first album 'A Song in My Heart' went straight to number one in the classical charts, where it remained for seven weeks.

Businesses from across the breadth of Powys from Ystradgynlais in the south to Llansantffraid in the north will be present at the Hafren in Newtown for the awards evening which will see 12 awards presented including the Judges Award and Powys Business of the Year.

The finalists are as follows: