Community recycling sites - use them responsibly, or pay the price 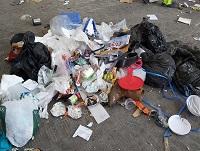 The irresponsible use of the community recycling sites is still resulting in tonnes of recyclable material needlessly going to waste.

With regular kerbside collections for every household there is no excuse for general rubbish to be dumped into the local community recycling sites. Some residents obviously feel as though they are entitled to contaminate the recycling banks with their rubbish rather than simply putting it in their own wheeled bin or taking it to one of the Household Waste Recycling Centres.

"This type of contamination is classed as fly-tipping and not only means that our poor staff have to go through and sort the rubbish by hand, but also often results in all the material within the bank rejected by the recycling processors. This selfish behaviour of a few irresponsible people is a huge waste of everyone else's time and effort and results in recyclable material needlessly going to waste.

"The contamination found within a recent load of cardboard collected from the community recycling banks from Builth Wells, Hay-on-Wye, Brecon and Llangynidr was shocking. On inspection our crews found items such as clothes, shoes, baby change mats, polystyrene, VHS tapes, electrical equipment, plastic bags, cans... the list goes on.

"Luckily for us (not so much for the guilty fly-tippers) there was also of evidence of the perpetrators names and addresses left within the bags of rubbish who can now expect to receive a fixed penalty notice and a warning any day now."

Members of the public are urged to report any incidences of contamination that they find or witness at the community recycling sites. This, along with the CCTV we have in place at many of the sites, will help catch and reprimand offenders appropriately. Individuals found guilty of deliberately dumping rubbish in the recycling banks can expect to receive a fixed penalty notice.