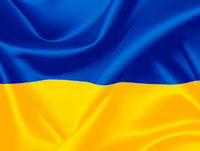 Powys County Council has sent a message of support to Ukraine, as the free world continues to urge Russian President Vladimir Putin to call off his invasion.

The invasion has been underway for over a week and has caused tremendous suffering and upheaval in the region.

Yesterday (Thursday, March 3), Council unanimously agreed to condemn the actions of President Putin and the Russian Armed Forces in invading Ukraine and committed the Council to do everything it can to support Ukraine and its people.

Leader Cllr Rosemarie Harris said: "We fully support and stand in solidarity with Ukraine during this difficult and dark time.

"The courage and determination shown by the Ukrainian people in the last week has been incredible. We all hope that the Russian government will realise its actions are wrong.

"Our thoughts are with the Ukrainian people and we hope that peace and humanity will overcome conflict."

Cllr Aled Davies, Deputy Leader and Cabinet Member for Finance, said: "Every effort is being made by the Council to investigate and cease any purchases of goods and services linked to Russian companies as soon as possible. We will also ensure that our schools and our suppliers are informed of our position and that they follow in our steps."

Cllr Myfanwy Alexander, Cabinet Member for Adult Social Care, Welsh Language, Housing and Climate Change, said: "The people of Powys have always shown themselves to be very eager to help those in need and we are certain they will rise to this challenge. We pledge to support our local Ukrainian community in any way we can and join our hopes and prayers with theirs as their homeland faces this catastrophe."

Cllr Peter Lewis, Chair of the council's Pensions and Investment Committee, said: "This urgent motion received my full backing. As a member of the Wales Pension Partnership (WPP), work is already underway to start disinvesting the Powys pension fund from any exposure or investments in Russian companies as soon as practically possible."

Cllr John Morris, who proposed the motion, said: "We are all horrified by the events that are unfolding in Ukraine.  I am sure the whole of Powys will join the Council in the condemnation of President Putin and his actions. It was heart-warming to get such support from Council. My thoughts and prayers are with the people of Ukraine and we will need to be prepared to do more in the future."

Cllr Elwyn Vaughan, who seconded the motion, said: "As one with a Ukrainian neighbour I'm well aware of the pain and suffering they are going through. It's imperative that we as Powys County Council send a message that we are standing with the Ukrainian people for democracy against Putin's tyranny."

Anyone who is able to help can consider making a financial donation to the Disasters Emergency Committee rather than by making physical donations of goods.

The urgent motion in support of Ukraine proposed by Cllr John Morris and seconded by Cllr Elwyn Vaughan, which was unanimously agreed by Full Council, was: