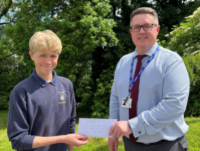 A logo for a new all age school in Llanfair Caereinion has been unveiled.

14-year-old Alaw Francis, who currently attends Caereinion High School, came up with the winning design that formed the basis of the logo that will be used by Ysgol Bro Caereinion, which opens this September.

Over 200 designs were received with eight being shortlisted by a panel made up of learners, governors, parents as well as members of Friends of School Ysgol Gynradd Llanfair Caereinion and Ysgol Uwchradd Caereinion PTA.

The eight designs went forward to the Temporary Governing Body of Ysgol Bro Caereinion who chose the winning design by Alaw, who has won a £200 cash prize.

The other seven designs were highly commended by the Temporary Governing Body. They were:

This simple and modern design symbolises the bridging of both schools, and the River Banwy. It signifies the unity with the wider community and the landscape of Montgomeryshire. It also captures the generations coming together from the youngest to the oldest pupil.

Cllr Gareth Jones, Chair of Temporary Governing Body of Ysgol Bro Caereinion, said: "I would like to thank all those who submitted their design and congratulate the pupils and Ellyw for their excellent creativity. The unveiling of this logo marks an important milestone towards the opening of Ysgol Bro Caereinion in September."

Cllr Pete Roberts, Powys County Council's Cabinet Member for a Learning Powys, said: "The new logo is a key point on the creation journey of a new school so congratulations to Alaw on coming up with a simple yet elegant design that captures the spirit of the catchment and well done to everyone else who put their own ideas forward."