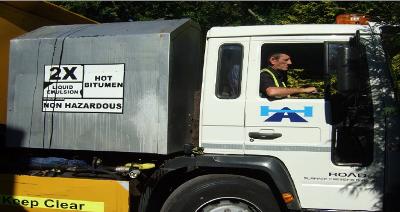 A man found guilty of running a fraudulent tarmac repair business has been ordered to pay back £150,000 to his victims at a Proceeds of Crime hearing at Cardiff Crown Court.

The POCA proceedings follow his five-and-a-half-year prison sentence handed down in August 2018 for his crimes. Failure to pay this sum within three months could result in an additional prison sentence of two years.

Allan John Coutts, 60, from Berkshire, cold-called victims across the whole of England and Wales between February 2015 and August 2016 to pressurise them into agreeing to driveway repair work. Consumers targeted were often elderly or retired and in some cases extremely vulnerable and were told their driveways could be repaired cheaply with excess supplies of materials.

The work Coutts did, which often took only hours to complete, was consistently of an extremely poor standard, with just loose stone chippings applied to existing driveways with no solution used to hold it in place. Customers would later discover the work they had paid for with a 'five-year guarantee' was worthless.  Coutts provided company details, a contact address and telephone number but subsequently failed to deal with any complaints which were numerous in number.

Victims were charged between £500 and £7,000. Coutts preferred customers to pay in cash, with some customers taken to local banks to withdraw money. The investigation - led by Powys County Council Trading Standards and supported by the National Trading Standards Regional Investigation Team Wales - uncovered £600,000 cash and card payments in just over a year.  The investigation highlighted wider criminality.  The Proceeds of Crime proceedings found that Coutts benefited to the sum of £905,000 from his criminality.

The business traded under several names, including Roadmac Construction Limited, A. Coutts Tarmac Division and Roads and Drives & Asphalting, in a deliberate attempt to avoid detection. The defendant used a lorry specifically designed to resemble an 'official' vehicle, such as that used by the Highways Agency, to cold call customers to try and obtain the driveway repair work. He would select secluded properties in remote areas with longer driveways to maximise profit and minimise the chances of being caught.

"Doorstep crime continues to blight our communities and leaves many of our most vulnerable citizens scared, scarred and bankrupt. Our expert teams are working to find the crooks and bring them to justice. The long prison sentence for Mr Coutts, combined with the additional confiscation orders announced today, send a strong message that crime does not pay.

"Thanks to the hard work of our investigators, the criminal must pay back consumers or risk facing a further prison sentence. If you believe you, or someone you know, has fallen victim to a fraud like this you should report it to the Citizens Advice consumer service helpline by calling 03454 04 05 06."

'We originally had some 10 victims in Powys of this fraud and this case demonstrates how well we worked regionally in partnership with National Trading Standards to investigate and prosecute this rogue trader, and take his ill-gotten gains from him.

"If we did not do this partnership work then rogue traders would get away with their crimes and benefit financially."

"Powys Council appropriately took on this case as the problem started here.  I wish to thank: