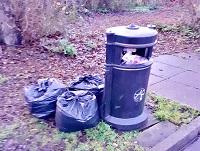 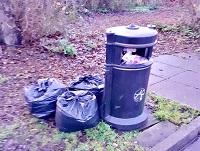 The misuse of a public litter bin cost a Hay on Wye resident £200 after they admitted the offence after being caught dumping bags of domestic rubbish in and around the bin in one of the town's car parks.

Elsewhere, a Knucklas resident has also been fined £200 for dumping their waste, including a Christmas tree, wrapping paper, food and general domestic rubbish, in a car park in Knighton.

Cllr Heulwen Hulme, Cabinet Member for Recycling and Waste, said: "We are working hard to clamp down on this anti-social and criminal behaviour which not only blights our communities, but also poses a public health and environmental hazard.

"By ensuring we identify fly tipping culprits, and using our enforcement powers to issue appropriate fines, we will reinforce the message that these crimes are not acceptable. We know that that majority of Powys residents act responsibly and feel strongly about their local environment, and they will feel reassured that we are tackling these issues."

Under Section 33 of the Environmental Protection Act 1990, it is a criminal offence to dump your rubbish in the wrong place, such as in these incidences of fly tipping. Not only could fly tippers end up with a hefty fine, but prosecution could also result in a criminal record.

We are always working hard to identify hotspots and target areas with regular inspections and CCTV cameras. But ultimately, clearing up after irresponsible residents costs the council money and is a drain on our already stretched resources.

"We have over 1,500 public litter bins across the county for residents and visitors to dispose of small items of rubbish whilst out and about." adds Cllr Hulme. "Misuse of these amenities, such as in Hay on Wye, creates more work for our street cleansing teams, which means they have less time to keep our local areas clean and tidy. In persistent cases of tipping or vandalism, we may end up having to remove the litter bins completely.

"Powys is a beautiful county and it is important that we all keep it this way by taking responsibility for our own actions and disposing and recycling our rubbish correctly."