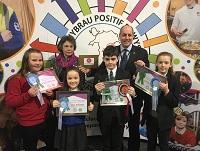 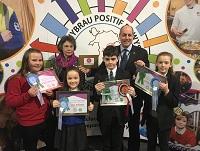 A Welshpool High School pupil has received a family ticket to Wales' premier agricultural show after winning a poster competition.

Year Seven pupil Evan Pringle won the competition, which was open to Year Nine pupils and under across Powys and Ceredigion. Over 350 entries were received for this competition run by the Positive Pathways Powys partnership, which also organisers the Powys Careers Festival.

Ffion Jones, a Year Seven pupil from Ysgol Bro Hyddgen in Machynlleth, was Reserve Champion and received a letter of invitation to the Smallholders and Countryside Festival.

Jackie Parker, Chair of Positive Pathways Powys, said: "I would like to congratulate Evan for winning this competition with a fantastic poster. This was a popular competition and I would like to thank all those who took part, everyone should be proud of their efforts."

The prizes were presented by Steve Hughson, Chief Executive of the Royal Welsh Agricultural Society, who was also part of the competition's judging panel.

"The standard of entries was excellent but the poster designed by Evan stood out. He clearly carried out his research by incorporating the logo for the Royal Welsh Agricultural Show's Feature County for 2020 - Clwyd.

"This competition fits with the Society's drive to promote the value of agriculture and the quality of Welsh produce to wider communities.  These posters will certainly help to deliver this important message."