New Leader and Chairman for council 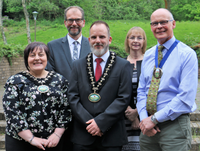 Powys County Council has a new Leader and Chairman of Council.

Cllr James Gibson-Watt, who represents the Glasbury ward, was elected as Executive Leader at the council's annual general meeting today (Thursday, May 26).

At the meeting, Cllr Gibson-Watt announced that the Cabinet will be a partnership between the Welsh Liberal Democrats and Welsh Labour.

Cllr Gareth Ratcliffe, who represents Hay ward, has been appointed Chairman of Council.