Team Powys formed to tackle violence against women and girls 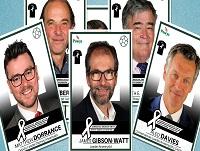 Political rivals in Powys are putting their differences to one side to help combat violence against women and girls through sport.

Councillors from across the political spectrum are to play together as a football team in a charity match to mark White Ribbon Day 2022 which this year falls on the same date (Friday 25 November) that Wales will face Iran at the FIFA World Cup in Qatar.

To mark both events, a Powys County Council team, mostly made up of members of its White Ribbon steering group, will take on Caersws FC Reserves at the Recreation Ground in Caersws at 1pm on Sunday 20 November.

The event is in support of White Ribbon UK, which is part of the global White Ribbon movement seeking to end men's violence against women. It will also act as a curtain-raiser to the World Cup which kicks-off later the same afternoon, at 4pm, with a match between Qatar and Ecuador.

Lining up on the left-wing for the council will be Labour's Cllr Matthew Dorrance, who is also its Deputy Leader and one of its White Ribbon Lead Ambassadors, while on the right will be Conservatives Group Leader Cllr Aled Davies.

There will be a duo of Liberal Democrats in the centre, including Council Leader and team goalkeeper Cllr James Gibson-Watt and the Cabinet Member for a Learning Powys Cllr Pete Roberts.

Completing the rainbow coalition against domestic abuse will be Cllr Gareth E. Jones (Independents for Powys).

They will be joined by fellow White Ribbon steering group members and ambassadors Matt Perry (Head of Highways, Transport and Recycling and Lead Ambassador) and Marc James (Work-based Learning Manager).

"We invite everyone to come along and watch the councillors and officers of Powys County Council take on Caersws FC, quite possibly with hilarious results," said Cllr Matthew Dorrance, whose portfolio includes supporting the White Ribbon movement. "We will also be encouraging as many people as possible, especially men and boys, to make the White Ribbon promise to never commit, excuse or remain silent about violence against women and girls.

"We will be aiming to have a bit of fun on the day ahead of the World Cup but will also be promoting the very serious and damaging issue of violence against women and girls which sadly tends to increase around major sporting events."

Members of the council's White Ribbon steering group will also be supporting members of Caersws FC to become White Ribbon champions and plan to encourage players and officials at other sports clubs in Powys to do the same.

Anthea Sully Chief Executive of White Ribbon UK added: "This year White Ribbon Day is focusing on the attitudes and behaviours men and boys can adopt to move away from associations to violent and abusive behaviour.

"Men and boys are now expecting better from their colleagues, friends and family to ensure women and girls are safe."

The council is a White Ribbon accredited organisation which means it has made a commitment to ending violence against women in Powys communities, improving its own workplace culture and ensuring the safety of its female employees.