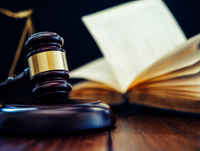 Two men who carried out substandard drainage work at a property near Llandrindod Wells have each received a 12-month community order after they were prosecuted by Powys County Council.

John Everitt Dixon of Rye Leaze, Bristol and Benjamin Michael Gracie of Roman Close, Lentwardine, were prosecuted by the council's Trading Standards Service after carrying out the work at a property in Howey.

Dixon and Gracie pleaded guilty to unfair trading and fraud charges including:

An investigation was undertaken by trading standards officers into the work carried out by Dixon and Gracie, along with other individuals employed by the pair, at the property in Howey in July 2021.

However, no paperwork was provided by the defendants, no plans were drawn up and neither appeared to have a licence to clear the rubble at the property from the excavation work, the investigation revealed.

The investigation found that the drainage system installed at the property was totally unfit for purpose. An inspection by a drainage engineer, at the request of trading standards officers, found that none of the drainage system was connected, interconnection pipework was missing and incomplete so the system would not work as intended and that the works were not carried out by a competent drainage contractor.

The investigation also found that the defendants did everything they could to try and deny liability for the work they carried out, constantly avoiding phone calls and when they did answer, they denied the job was theirs and tried to pass the blame to someone else.

Gracie and Dixon each received a 12-month community order and were ordered by magistrates to also carry out 100 hours of unpaid work.  Gracie was given 20 Rehabilitation Activity Requirement (RAR) days and with Dixon receiving 10 RAR days.

Both defendants were also ordered to each pay £1,300 compensation to their victims in addition to a £95 surcharge and £85 for the council's costs.

Cllr Richard Church, Cabinet Member for a Safer Powys, said: "The conclusion of this case sends out a clear message that trading practices such as these will not be tolerated.

"This case should serve as a reminder to our residents to be vigilant of these crimes and scams to avoid becoming a victim of a rogue trader. I would urge residents to do their research on a business before entering into an agreement and to be cautious when paying money upfront.

"For work carried out at a resident's home that is more than £42 in value, traders are required by law to provide cancellation rights. This gives 14 days for contracts to be cancelled.

"Under the regulations, traders are required to exercise professional diligence in the work they carry out. If the council receives reports of particularly bad workmanship or work not as described, then this could lead to an investigation by our Trading Standards team."