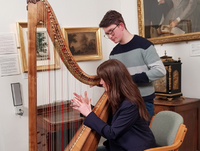 A Welsh Triple Harp that resides at a Powys County Council museum has appeared on a popular daytime television programme.

The special item, which can be found at the Radnorshire Museum in Llandrindod Wells, featured on an episode of BBC One's Bargain Hunt. The episode was broadcast on Monday, November 7 and can be still viewed on BBC iPlayer.

The popular programme, which sees two pairs of contestants buying antiques from shops or a fair and then sell them in an auction for profit, visited the museum to film the harp.

As part of the visit, staff at Radnorshire Museum and Bargain Hunt presenter Natasha Raskin-Sharp were treated to a performance by award-winning Welsh Triple Harpist Gareth Swindail-Parry.

Presenter Natasha then spoke to Radnorshire Museum curator Lorna Steel about the harp, which belonged to prominent Victorian musician John Roberts and was presented to the museum by his family in the 1950s.

Filming of the episode took place in May when the programme took contestants to the antiques fair that was held at the Royal Welsh Showground in Llanelwedd.

Cllr David Selby, Cabinet Member for a Prosperous Powys, said: "We were delighted to be asked to see this special item feature in Bargain Hunt.  The film crew were very professional and everyone was in awe of Gareth's performance.

"It is great to have one of our museums featured on Bargain Hunt and to see part of our Welsh cultural heritage promoted on national television."

The episode can still be viewed on BBC iPlayer by searching Bargain Hunt.